Ghotul – a village dormitory for unmarried girls and boys

Ghotul is an essential part of Muria and Gond tribal culture in the Bastar area of Chhattisgarh as well as in the neighboring regions of Maharashtra, Madhya Pradesh and Andhra Pradesh.

It is basically a large Hut of Gond and Muria tribe bordered by wooden or earthen walls. This serve as a territory for unmarried adults. Ghotul is also know as autonomous and independent Youth’s Republic.

Ghotul is a religious and social Center for Gond tribal society and is a village dormitory for unmarried girls and boys. The young adults here can date, practice the sex before the marriage with one or different partners, learn the culture and legends of their tribe.

As per the tribal legend – Lingo, their brave ancestor and the highest deity built the initial Ghotul and the founder of this culture. In Ghotul, the boys are termed as Cheliks whereas the girls are called Motiaris, the leaders of Ghotul here are called Siredar and Belosa respectively. 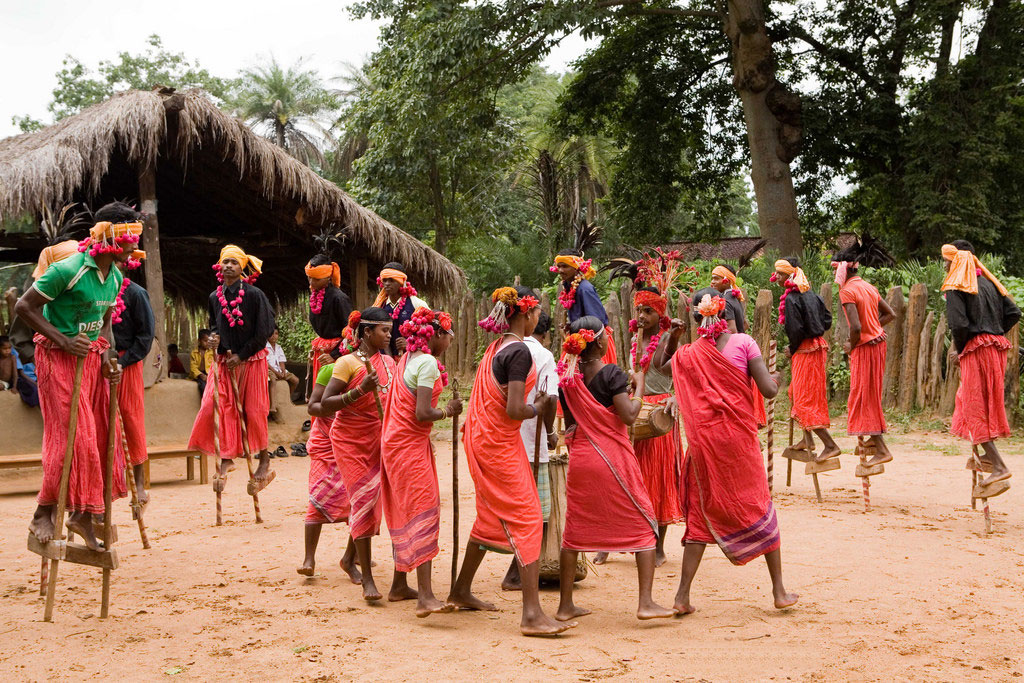 Here, the young members are taught various lessons such as discipline, cleanliness and hard work. The boys and girls are also taught the idea to serve the public, take the pride in the appearance and respect their seniors and themselves.

Ghotul has an important social sanction in the society and is one of the major social institutions. In the tribal society, none of the important social function can happen without the active participation of the members of Ghotul. The boy members act as acolytes during the festivals whereas the girl members as bridesmaids at the time of weddings. The participation of Ghotul members continue till the death ceremonies in their society.

In Gond tribe society – it is a holy place associated with their supreme deity Lingo and here the members can commit no wrongs, it is a residence embedded in and cherished by the greater socio-religious site of the Gonds.

The Ghotuls of Madia Gond tribes are quite different from the Ghotuls of Bastar  region; here the girls and boys go to their respective houses to sleep in the night.

In Muria tribal culture, the young members are sent to the Ghotul. The dormitories of mixed sex youths. Here the youths are expected to live in closely and engage in the activities of sexup to the inter courses. Group sex is not allowed in the Ghotul.

In some places the members are discouraged for emotionally attachment to the partners and are punished for sleeping together with same partner for more nights, the privacy during the intercourse is important but not a necessity here. However at some Ghotul, adolescents are encouraged for monogamous relations.

Dances and activities in Ghotul

You can get a chance to enjoy the live performance of Ghotul dance with Odisha And Chhattishgarh Tour offered by HTOIndia.

Ditong Dance or Gedi Dance performed by the Muria boys with girls to woo them and show the physical balance. Gedi is basically a pair of stilts made of Bamboo having footrests. Muria youths strike these stilts on the land to make the modest musical beats; both boys and girls perform Gedi Dance in a circle.

There is also hierarchy here, Sirdar – the head boy and Belosa – the chief girl are the in-charge of Ghotul and assign specific work to each member like cleaning, sweeping and cooking etc.

Share this interesting piece of information with your friends on your social media.

At Hidden Treasures of India, we want to share the real charm of this mysterious country and our tour program reflects that. All our special tour programs have received a great applause from tourist all around the world.

In the same series of special program, we are organizing a tour program for Rajim Kumbh Mela 2018 and Madai Festival along with some other great tribal attractions like Bison Horn Maria & Ghotul Dance, Tribal Markets & Villages.